We’ve all been staying home safely for a while now and have been playing, reading, exercising, crafting and watching many things and we thought some of you may be running out of fresh ideas. So, we have scoured the internet and had a look at what’s popular and we have rounded up six fun and fabulous card games that you can play at home with the people you are staying safe with.

Did you know you can source LEGO, card and board games with Booko? If not, have a look at our ‘how to’ guide here.

Let us know what you are playing in the comments below.

This is a strategic card game that will destroy your friendships…but in a good way. It’s one of Kickstarter’s Top 50 Most Backed Projects of all time! You start with a Baby Unicorn in your stable (super cute). But don’t get too attached, because even Baby Unicorns aren’t safe in this game! There are over 20 Magical Unicorns to collect and each has a special power. Everyone is aiming to build a Unicorn Army as fast as you can, or be destroyed by one of your so-called friends! You can seek revenge or protect your stable using your magic. But someone could have a Neigh Card and send the game into madness. The first person to complete their Unicorn Army shall hereafter be known as The Righteous Ruler of All Things Magical..at least until the next game.

The use-your-noodle card game! Rush to prepare and slurp up delicious bowls of ramen filled with tasty ingredients. Collect combos of cards to score for different recipes while adding garnishes to boost your points. At the same time, watch out as other players throw spicy chilli peppers your way or swipe foods right from your bowls! It’s “take that” fun that will have you calling for takeout!

This is the social card game that is going to change your game days forever. This addictive game is as unique as its name. It’s a power packed quick and simple party game. Race against each other to SLAP a match between a card and spoken word. But – watch out! – your mind will play tricks on you.

As in Snap, each player places a card from their hand face up into a community pile while saying taco/cat/goat/cheese/pizza in player sequence. When the card matches the mantra everyone slaps their hand on the deck, with the last one to slap picking up the cards. Whoever rids themselves of cards first wins!

Strategy…Choices…Tension…the three essential ingredients to any great game. All of them play a vital role in this easy-to-learn and instantly engaging card game from first-time inventor Zachary Eagle. This game has a unique twist on set collection card games. In addition to the whimsical variety of donuts inside, part of what makes this game stand apart from the crowd is the secret bidding. This adds a delicious layer of tension that will surely tempt you to come back for another round! A tray of tempting treats awaits your bid, will you go for a stellar cruller or grab a glorious glazed? A double chocolate is sure to score, but in the long run Boston cream may be worth more. Choose carefully because if two or more players go for the same donut, nobody gets it! End with the highest score and victory will taste sweet.

How long can a dolphin hold its breath? At what temperature does popcorn pop? I’m Not Saying You’re Stupid is a fun and fresh game featuring over 400 questions that are random, hilarious, and almost impossible to answer just right. The answers are always numbers in this game, which sounds simple enough. But watch out! If your opponents think your answer sounds hopelessly wrong, they can stick you with an I’m Not Saying You’re Stupid…card. Correctly guess who will be furthest from the right answer and watch the points pile up!

The perfect game for anyone who loves new trivia, wild guesses, and uproarious laughter! A dynamic and entertaining game for an evening at home!

In this super fun card game players are raucous raccoons, tipping over trash cans for food. Trash is treasure. In this raucous card game, paw through the deck to find sets of day-old pizza, half-eaten candy, and other luscious leftovers. Roll the dice to tip over the garbage or raid a rival’s rubbish, if there’s no Doggos standing guard. The more you roll, the more actions you can take, but get too greedy and your turn is scrapped. Stash the most trash and you’re pick of the litter.

How do you extend that summertime feeling to the rest of the year? For me, summer holidays mean more time to enjoy the company of family and friends – eating, chatting and playing together. Such quality time may seem impossible within the busyness of your normal routine, but is definitely worth scheduling. Start with an activity that can involve your whole family – such as cooking, making things, playing games or reading – here are some resources to get you started. And if you are a fan of board games, don’t forget that Booko can help you find the best prices for games as well as books! 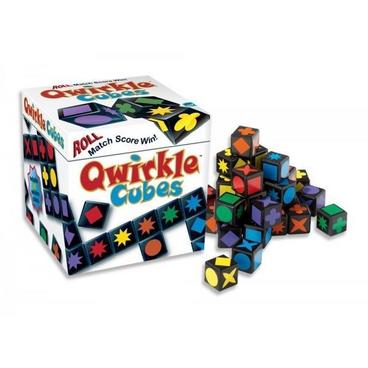 The latest version of this award-winning game comes as a set of colourful cubes. Make rows or columns of cubes by matching either the colour or shape on their faces. The cubic shape of the pieces add an extra level of game play – you can try to change the shapes you have by rolling the cubes. The basic rules are easy to learn for even young players, while some tactical thinking will ensure you achieve high scores. For 2-4 players, ages 6+ 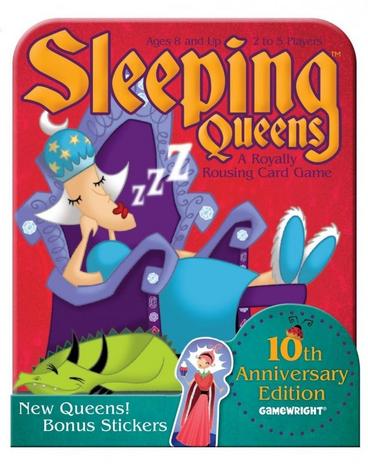 Sleeping Queens has become a family favourite after we travelled with it this summer. It is a compact card game with a fairytale / Alice in Wonderland flavour (and this special 10th Anniversary edition comes in a beautiful carry tin). The Pancake Queen, the Rose Queen and their ten queenly friends have fallen into a magical sleep and need to be woken up. A King can wake a Queen but watch out for Knights that might steal her away! Winning is based on a little skill, some maths and some luck. Sleeping Queens also shines through its gorgeous and funny art. For 2-5 players, ages 8+ 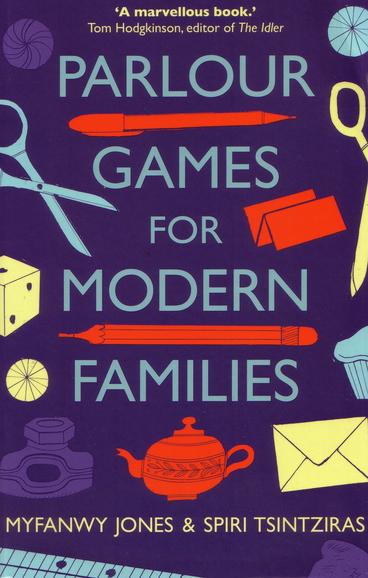 Parlour Games for Modern Families shows how to play silly and raucous games with big crowds and small, and with few or no props at all. Unusual games such as Farkle and Blind Potatoes join old favourites including Chatterboxes, Murder in the Dark and Dictionary. There are chapters for word games, drawing games, card games and mystery games. Suitable for ages 4-104, these games will help to lighten up rainy days, family gatherings, even dinner parties and work functions. 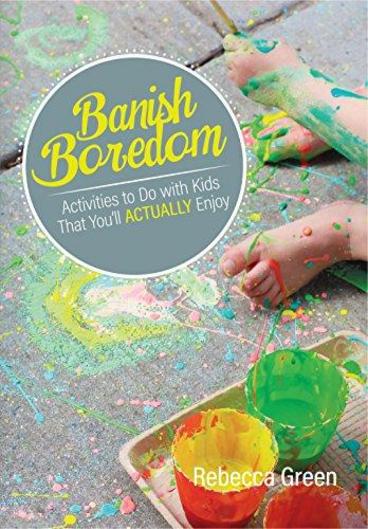 Banish Boredom: Activities to Do with Kids that you will Actually Enjoy by Rebecca Green

We’ve all been there – that resigned feeling of doing an activity “for the kids” rather than “with the kids”. Banish Boredom promises to change all that, with suggestions on activities that are stimulating and fun for both adults and kids. From art to science experiments to excursions, Rebecca Green offers a variety of ideas as well as useful tips on how to plan, manage and extend activities. Banish Boredom is a great parenting resource for any time of year. 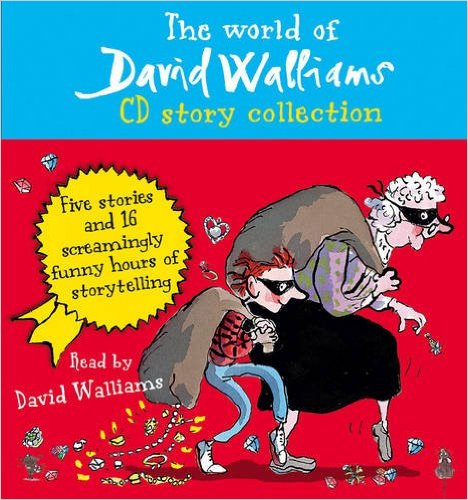 Listening to audiobooks turns reading into a social activity, especially useful on those long holiday car trips. Comedian-turned-superstar-author David Walliams is the creator of bestsellers including Mr Stink and Awful Auntie. Many reviewers see him as a successor to Roald Dahl, skilfully mixing over-the-top humour with poignant reflections on friendship and loneliness. David Walliams voices his audiobooks himself – but listen out for cameos by famous guests such as Matt Lucas. For immediate gratification, choose the 14-CD 5-story set ; or pre-order the Bumper-tastic 27-CD, 8-story edition , out in late January. 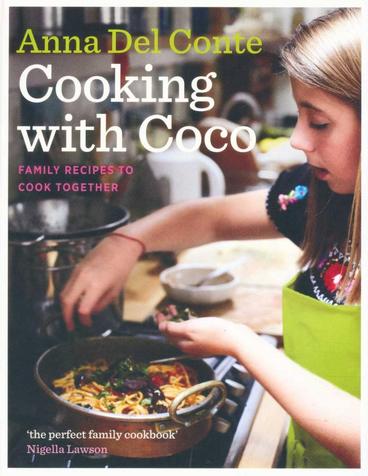 Cooking with Coco: Family Recipes to Cook Together by Anna Del Conte

Cooking is a great activity to do with children – not only will there be a delicious outcome, you will also be nurturing some healthy habits and useful life skills. Cooking with Coco is a collection of recipes Anna Del Conte has cooked with her children and grandchildren (Coco, now in her teens, has become a confident and creative cook). The collection features classic dishes including baked polenta, beef rolls, basic biscuits and pear cake – sophisticated food that will appeal to both adults and children, without resorting to novelty shapes or lollies.