I first stumbled on Ann Morgan’s book ‘Reading the World’ upon recommendation from a friend. When you’re grounded by the humbling mundanity of work and family, living vicariously through someone fulfilling their own huge personal goals has its own rich voyeuristic quality. 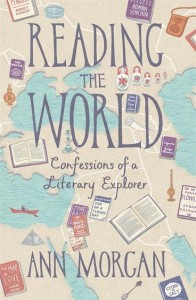 Morgan’s goal was to read her way through 196 of the world’s independent countries. No small feat.   This goal was inspired by the lack of diversity in Morgan’s own bookshelf and also by the 2012 London Olympics. Morgan says that the world came to London and she went out to meet the world.

Some of the challenges she encountered included getting access to translated works: just 4.5 per cent of poetry, fiction and drama works published in the UK every year are translations. There are also many countries that have a small amount of texts translated into English. Some countries (such as Nauru and Tuvala) didn’t have very much written down at all. Other countries have cultures of almost exclusively oral storytelling. There are also countries that won’t permit books being leaked out to Western folk.

Essentially like most ambitious goals,  it wasn’t an easy task – but it was an incredibly fulfilling one (and all achieved in a year). Morgan’s Ted Talk is also compelling viewing if you are questioning how widely you are actually reading.  Part of the charm of this book is her engagement with her online community and the role people from around the globe played in helping her achieve her quest.

P.S. If you want an easy way of getting your hands on the books Ann read, go and check out our Pinterest board with links to almost all the books on her list: https://www.pinterest.com/officialbooko/a-year-of-reading-the-world/